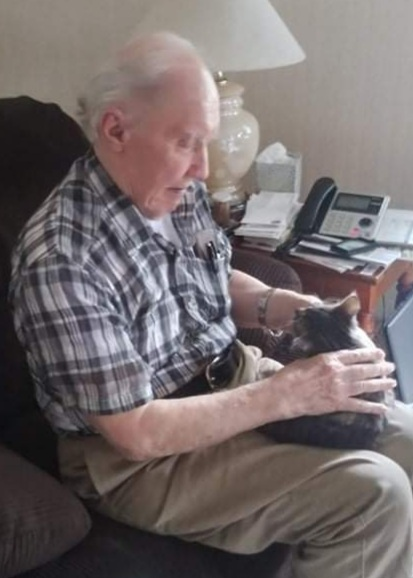 Please share a memory of Don to include in a keepsake book for family and friends.
View Tribute Book
Dansville- Don Eugene Myers, age 88, passed away early Sunday morning October 31, 2021, at Strong Memorial Hospital in Rochester following a brief illness. Don was born in Dansville, on August 17, 1933, son of the late Leo and Anna (Prusalitus) Myers. Don was a pilot in the Navy and told many stories about being stationed in Virginia. Among many other achievements, Don recieved an award in 1960, following a maximum effort operation where he provided protection during the operation on the high seas for the forces of our United States and its allies. Don later became a pilot for USAA, flying Boeing 737s to California. He also flew to many other destinations such as Germany, Egypt, and flew over both the north and the south pole. Don had a love of collecting items from Germany and Egypt, collecting pocket watches, clocks, and coins. Don played the violin, loved to read, draw, and enjoyed researching genealogy. He was a very generous man, donating to charities such as the Disabled Veterans Association, public safety organizations and churches. Don is survived by his closest friends, Alice Burdick, Megan Aldrich, Ann Myers, and his cat that followed him everywhere, Kitty (featured in the photo). A memorial service will be held on Saturday November 6, 11:00am at St. Peters Episcopal Church 25 Clara Barton St Dansville. Interment with full military honors to follow in Greenmount Cemetery Dansville. Arrangements by the Hindle Funeral Home Inc. 271 Main St. Dansville. Online remembrances may be left at HindleFuneralHome.com. In Lieu of flowers please make donations to St. Peters Episcopal Church 25 Clara Barton St. Dansville, NY 14437, or the Dansville Police Officers Association 14 Clara Barton St. Dansville, NY 14437 Attn: Shannon Griese
Saturday
6
November

Share Your Memory of
Don
Upload Your Memory View All Memories
Be the first to upload a memory!
Share A Memory
Send Flowers
Plant a Tree