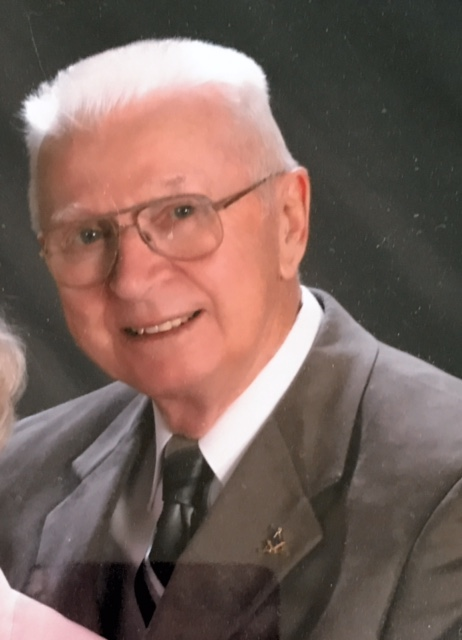 Please share a memory of Gerald to include in a keepsake book for family and friends.
View Tribute Book
Dansville/Penn Yan – Gerald (Jerry) Seymour Barden - Born in Penn Yan, NY on January 10th, 1926, before moving to Dansville in 1968. He passed peacefully on June 17th, after living a long blessed and fulfilling life. He is survived by his 6 children; Janice (Bruce) Hinman of Spencerport, George “Jody” Barden of Canandaigua, Pamela Carlson of The Villages, Fla., Rose Anne (Dan) Rawlings of Yorktown, Va., Ross (Beth Laidlaw) Barden of Dansville/Rochester, and Beth (David) Tillman of Penn Yan, as well as 13 grandchildren, 9 great-grandchildren, and 3 great-great-grandchildren. He is predeceased by his wife of 74-years, Helen Lou (Swanson) Barden, his parents Frank and Vera (Seymour) Barden, sisters Dorothy and Lucille, and brother Kenneth-a World War II vet who Jerry last saw during his Honor Flight to DC in 2015. He married his high school “forever friend” Helen Lou in 1945, and they continued in the business of crop and dairy farming on the Barden Family Farms in Benton Center until 1968, when he sold his holdings and took a position with Agway Corp. of Central NY, thus moving to Dansville. Up to that time he held various offices in the Benton United Methodist Church, the Benton Grange #1166, Yates Co. and Pomona Grange-holding Masterships, and also a membership in the New York State Grange. He served Yates county youth as a 4-H leader, and was an officer of the Yates Co. Fair Association, and the Farm Bureau. At the time of his move, he had to resign as Justice of the Peace for the town of Benton, Yates County. While with Agway, he rose to the position of area Sales and Crop/Dairy Representative for the Holcomb, Hemlock and Dansville Agway stores, retiring in 1988 after 20 years. As a Dansville resident, he served as Master of Phoenix Lodge #115 of the Order of Free and Accepted Masons; Past President of the local Kiwanis club., and 15 years as a member of the Dansville Ambulance Company, responding to over 1250 calls. As a member of the United Methodist Church, he served as Lay Leader, Board Chairman, and performed with the Sanctuary Choir and the Chancel Hand bell Choir, and concluded his working career as the church custodian for over 20 years, retiring at the age of 93 years young. In 2000, he was honored at Seniorama as North Dansville’s Senior Citizen of the Year. His lifetime interests include music, following politics, reading, horses and buggies, and restoring their historic homestead in Dansville they named Hearthside, and famous for “jerry-rigging” anything which did not seem to work right. Calling hours will be held in the sanctuary of the Dansville United Methodist Church on Saturday, June 26th, from 10am-12, followed by the funeral service, then a reception and luncheon in the church’s fellowship hall. A family only committal will be held at the Union Cemetery in Scottsburg, at 2:30pm. Arrangements are by the Hindle Funeral Home, Inc. 271 Main St. Dansville. Online condolences may be left at HindleFuneralHome.com. In lieu of flowers please make memorials to Dansville United Methodist Church, 5 Chestnut Ave., Dansville NY 14437, or Vincent House Inc., 310 Second Ave. P.O. Box 566, Wayland, NY 14572, or the Dansville Ambulance company.
Saturday
26
June

Share Your Memory of
Gerald
Upload Your Memory View All Memories
Be the first to upload a memory!
Share A Memory
Send Flowers
Plant a Tree