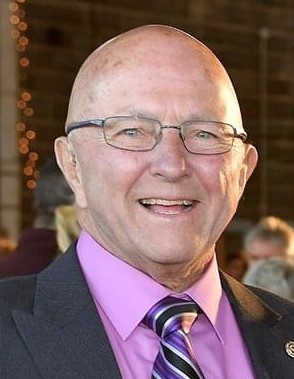 Please share a memory of Jon to include in a keepsake book for family and friends.
View Tribute Book
Dansville—Jon H Shay, age 78, a well-known humanitarian and businessman, passed away Monday, January 18 in the early afternoon at Noyes Hospital in Dansville. Jon was born on October 22, 1942 in Dansville, son of the late Harold A. “Tim” and Margaret (Bacon) Shay. He was also predeceased by a brother Timothy L. Shay in 2016. His wife of 57 years, Linda (Yencer) Shay, survives. Jon graduated from Dansville High School in 1960 and quickly became involved with Shay’s Service Inc., the family trucking business. Over the years, he remained in an ownership role of other family holdings including Shay Trucks, HASCO Realty, Main Tire Exchange and Dansville Mini Storage. Jon oversaw the growth of the existing family businesses with his brother, Tim, and his father Harold. Jon entered semi-retirement in 2012. At an early age, Jon discovered a passion for community service and became actively involved with several local service and charitable organizations in the Dansville community. As a young man, Jon attained the highest rank of Eagle Scout in the Scouts BSA program of the Boy Scouts of America. Scouting was important to him as he remained a devoted member of the Five Rivers Council of the Boy Scouts of America and was presented the Silver Beaver Adult Volunteer Award. In addition, he was a longtime board member, volunteer and supporter of the Vincent House in Wayland. Jon was also a board member and Past President of the former New York State Motor Truck Association, currently the Trucking Association of New York (TANY), known as a statewide lobbying and support group for the truck transportation industry. Jon was a very proud Dansville Rotary Club member for over 40 years, having served as a multiple term President while earning Rotary International’s highest distinction as a Paul Harris Fellow. Jon never missed an opportunity to participate in any Rotary events or activities. From 2012 to 2020, Jon was the Chairman of the Noyes Health Foundation Board and led the foundation by raising visibility and funds for the hospital Emergency Room and Cancer Center expansions. Both hospital expansions were highly successful, due in large part to Jon’s leadership. He was deeply passionate about our local hospital and the Shay family connection to the Noyes Facility. Jon received many honors and achievement awards throughout his lifetime. In 2002 Jon was nominated to be a participant in the Olympic Torch Procession where he proudly carried the Olympic Torch along its path to the 2002 Olympic Games in Salt Lake City. In 2006, Jon was awarded the Humanitarian Award given for charitable and civic community contributions by the national trade publication, Tire Dealer Magazine. He was the inaugural recipient of the Founders Award, presented by the Clara Barton Chapter #1 of the American Red Cross. In August 2020, Jon represented the Shay Family for their support of Alfred State College during the ribbon cutting celebration of the Shay Family Athletic Hall of Fame. Later that same year, Jon was awarded the ESL Centennial Award, which is presented to an outstanding individual in honor of their contribution and commitment to volunteerism. In 2021, he will be inducted into the Dansville High School’s Wall of Pride. Jon was happiest when he could quietly and anonymously stay busy helping others in a variety of ways. Jon was first in line to offer a donation, lend a hand, loan a truck or tool, or just give his support. Jon gave with all his heart and was never “middle of the road.” Known for his compassion toward people and causes, his impact was felt by many and will be missed by all. Surviving in addition to his wife Linda are three daughters Kelly (John) Hoag, Kristine Shay, and Nicole (Brent) Richardson, four grandchildren, Garrett and Kaitlyn Hoag and Kennedy and Tyler Richardson, two sisters, Mimi (Al) Burdick, and Katherine (David) Carlson, a sister-in-law Deborah Shay and several nieces and nephews. Friends called on January 21, 2021. Reference Hindle Funeral Home, Inc 271 Main Street Dansville. Interment will be in Greenmount Cemetery, Dansville. Online memorials may be left at HindleFuneralHome.com Memorial donations in Jon’s name may be made to the Noyes Foundation, 111 Clara Barton Street or the Dansville Rotary Club, P.O. Box 636, both of Dansville, NY 14437.
Thursday
21
January

Share Your Memory of
Jon
Upload Your Memory View All Memories
Be the first to upload a memory!
Share A Memory
Send Flowers
Plant a Tree