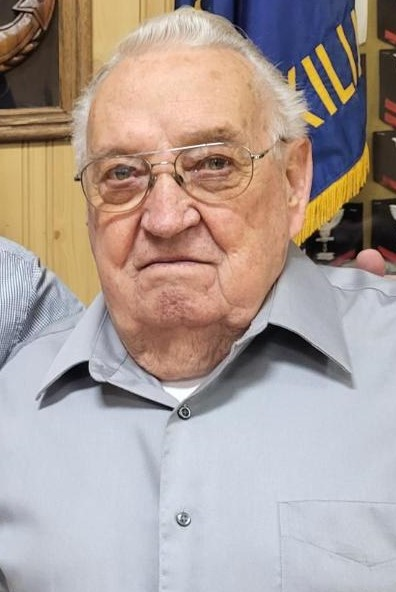 Please share a memory of John to include in a keepsake book for family and friends.
View Tribute Book
Dansville- John Neis Carey age 89, passed away early Monday morning January 16, 2023, at Noyes Memorial Hospital in Dansville following a short illness. He was born in Dansville on March 20, 1933, a son of the late Dewey and Helena (Neis) Carey. He was also predeceased by a sister Alice Acomb and a brother Robert Carey. On April 28, 1956, he was married to the former Carol Howe Carey who survives. John was a US Army veteran serving in Germany from 1956-1958. He was a former pressman at FA Owen Publishing Company from 1956 until he retired from the former Dansville Press. He was also employed in the Green Thumb program at Stony Brook State Park. In his free time, he enjoyed, snowmobiling, old cars and tractors, and camping. John and Carol spent time in Florida for ten years during the winter months. John was Communicant of the Holy Family Catholic Community at St. Mary's Church in Dansville. He is survived by his dear wife of 67 years, Carol, a daughter Karla (Joel Devenport) Carey of FL, two sons, Richard "Newt" Carey and James "Jim" (Kristin Luxon) Carey both of Dansville, four grandchildren, Mara (Alyse) Carey, Michael Carey, Benjamin Carey and Samantha Carey, two great-grandchildren Oliver and William, and several nieces and nephews. A memorial Mass of Christian Burial will be Celebrated on Friday January 20, 10:30 am at St. Mary's Church in Dansville. Interment with Full Military honors will be in Holy Cross Cemetery, Dansville. Arrangements are by the Hindle Funeral Home Inc. 271 Main St. Dansville. Online remembrances may be left at HindlefuneralHome.com. In lieu of flowers please make memorials to Daniel Goho Post # 87 of the American Legion Firing Squad, PO Box 306, Dansville, NY 14437, or St. Mary's Church.
Friday
20
January

Share Your Memory of
John
Upload Your Memory View All Memories
Be the first to upload a memory!
Share A Memory
Send Flowers
Plant a Tree