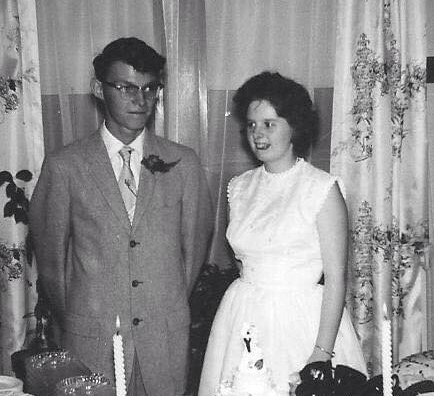 Please share a memory of Merry to include in a keepsake book for family and friends.
View Tribute Book
South Dansville- Merry Alice (Buell) Patterson age 79, gained her wings late Tuesday evening 18 October 2022 at Elderwood in Hornell. She was born in Dansville on 9 July 1943, the daughter of the late Emrie LaVern and Dorothy Mae (Lawrence) Buell. A lifelong resident of South Dansville and graduate of Dansville High School, she married Loren Patterson 5 August 1961, and he passed on 27 January 2014 after having been married for 52 years. In younger life she was a homemaker and mother of three wild boys. She sewed, creating everything from shirts to wedding dresses. As a talented baker, she created countless birthday, wedding and anniversary cakes as well as many other delectable treats. She loved animals, leading to numerous pet dogs and cats over the years. Also, raising several horses which she enjoyed taking them out for rides with the sleigh or buggy. Later in life she became a Home Health Aide, working for over 20 years with the Livingston County Health Department, focusing on terminal care. She loved to travel with Loren, especially to Nashville and the Grand Ole Opry, as well as visiting friends and family near or far. She is survived by her brother, Leslie Buell. Her three sons, Ward Patterson, Thomas Patterson and Daniel Patterson (Jay Frederick); her grandchildren Andrew Patterson and Alexis Patterson and their mother (Susan McMaster). Sister-in-law Jean (Patterson) Gleason, Brother-in-laws Roy Patterson and Alvin (Victoria) Patterson. Coming from and marrying into large extended families, she will be dearly missed by several nieces, nephews, great-nieces/nephews and countless cousins, and many dear friends. There will be a celebration of life held Tuesday October 25, visiting hours begin at noon followed by a service at 2PM. Arrangements by the Hindle Funeral Home Inc, 271 Main Street, Dansville NY 14437. Online remembrances may be left at HindleFuneralHome.com. In lieu of flowers, please make a memorial to a charity of your choice and attend Billy Martin's Cole All-Star Circus when they come to a town near you!
Tuesday
25
October

Share Your Memory of
Merry
Upload Your Memory View All Memories
Be the first to upload a memory!
Share A Memory
Send Flowers
Plant a Tree