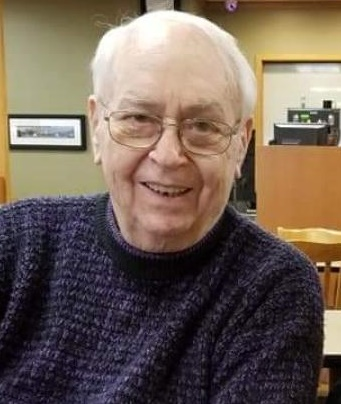 Please share a memory of Charles to include in a keepsake book for family and friends.
View Tribute Book
Dansville- Charles E. Mettler Sr., age 93, passed away Friday October 14, 2022, at Highland Hospital in Rochester following a brief illness. He was born in Ithaca, NY on January 5, 1929, a son of the late Egbert and Marion Brewer Mettler. On May 28, 1950, he was married to the former Barbara Olds Mettler who survives. Chuck was a US Navy WWII veteran serving on the USS Philippine Sea from 1946 to 1948. During his tour of duty, he became a Shellback (a sailor who "Crosses the Line" of the equator). He was a member of the Daniel Goho Post # 87 of the American Legion, and the Loyal Order of the Moose #1130 both of Dansville. In his free time, he enjoyed time with family, watching baseball and supporting his children and grandchildren at their sporting events and collecting hats. He started his career as a hardware salesman for Rose, Kimball and Baxter in Elmira, before becoming regional sales manager for Cotter and Company. He was part owner of I-Deal Lumber and Hardware Company in Dansville, before finishing his career as a buyer for Smith Lumber and Hardware Company in Lakeville. Surviving in addition to his wife of 72 years Barbara, are, two sons, Charles (Suzanne) Mettler Jr., and Bryan Mettler (Laurie Berthold), a daughter Cynthia (Kevin) Davis; a brother Douglas Mettler, grandchildren Sara (Adam) Frank, Kevin (Elise) Mettler, Cameron (Annabelle) Davis, Curtis (Lexie) Davis and Carter Davis, great-grandchildren Olivia and Caroline Frank and Connor Mettler. A family service will be held on Tuesday October 18 followed Celebration of Life reception from 4 to 7 pm for family and friends at the Dansville Foursquare Church 49 West Ave., Arrangements are by the Hindle Funeral Home, Inc, 271 Main St., Dansville, Online remembrances may be left at HindleFuneralHome.com. In lieu of flowers please make memorials to Myers Cancer Center at UR/Noyes Memorial Hospital, 111 Clara Barton St., Dansville, NY 14437 or JDRF.org.

Look inside to read what others have shared
Family and friends are coming together online to create a special keepsake. Every memory left on the online obituary will be automatically included in this book.
View Tribute Book
Services for Charles Mettler Sr.
There are no events scheduled. You can still show your support by sending flowers directly to the family, or planting a memorial tree in memory of Charles Mettler Sr..
Visit the Tribute Store

Share Your Memory of
Charles
Upload Your Memory View All Memories
Be the first to upload a memory!
Share A Memory
Send Flowers
Plant a Tree