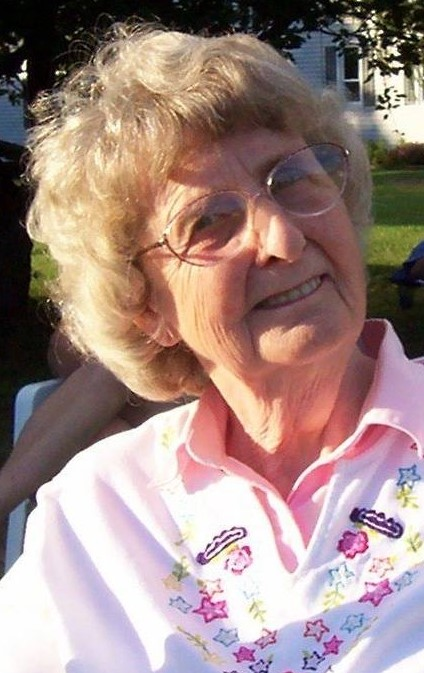 Please share a memory of Helen Lou to include in a keepsake book for family and friends.
View Tribute Book

She is survived by her "forever friend" and husband Gerald (Jerry) Barden-married for nearly 74 'forever happy years' Along with 6 children; Janice (Bruce) Hinman of Spencerport, George "Jody" Barden of Canandaigua, Pamela Carlson of The Villages, Fla, Rose Anne (Dan) Rawlings of Yorktown, Va., Ross Barden of Dansville, and Beth (David) Tillman of Penn Yan, as well as 13 grandchildren, 12 great-grandchildren, and 1 great-great grandchild.

She was predeceased by her father and mother, Victor and Helen Swanson, as well as her sister Jean (and Jim) Carroll, and her brother Jim (and Fran) Swanson, all of Penn Yan.

All she ever wanted was to marry a farmer and live the country life with a big family, and her dream came true when she met Jerry. They made their home on the Barden family farms outside of Benton Center, dairy and crop farming until 1968. Then moved to Dansville, living in and restoring together the old Hartman homestead, she named it, "Hearthside".

Homemaking and child raising were her fortes, yet she still found time to pursue many interests by first attending classes at Penn Yan Academy's Adult Education evening program, using the gained knowledge to pursue her many hobbies, including painting, antique furniture refinishing, and writing, among many others. After writing columns for the Geneva Daily Times and the Penn Yan Chronicle Express, she also reported area news on WFLR radio in Penn Yan. She spent her later years authoring 3 books, while also selling antique furniture, and later opening the "Doll House & Toy Chest" specialty gift shop she ran out of "Hearthside".

Also, very important to her and Jerry, was their shared faith in God and their service to the churches where they worshipped. After attending a choir directing seminar, she became the Choir Director at the Benton Center United Methodist Church, and then established and directed the Dansville United Methodist Church Youth Choir, and eventually directed the Sparta/Dansville Bell Choir. She also served as church secretary in Dansville for nearly 20-years under 2 different ministers, was very involved in the United Methodist Woman's group, as well as a committee member in the creation of the Church Memorial Library.

A funeral service will be held at the Dansville United Methodist Church at 11:00 am on Saturday, December 21, 2019, followed by a reception and luncheon in the church's fellowship hall. A family only committal will also occur after the service, and they will then join everyone in the fellowship hall. Interment will be in Union Cemetery, Scottsburg. Arrangements are by the Hindle Funeral Home, Inc. 271 Main St. Dansville. Online condolences may be left at HindleFuneralHome.com.

Share Your Memory of
Helen Lou
Upload Your Memory View All Memories
Be the first to upload a memory!
Share A Memory
Send Flowers
Plant a Tree