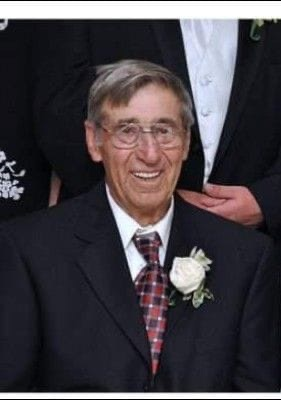 He was born in the Town of West Sparta of April 4, 1928, a son of the late Otto and Flossie (Jamison) Wolfanger.  On March 20, 1948, he was married to Corinne “Cork” Miller Wolfanger, who predeceased him on August 31, 2012.  He was also predeceased by two brothers Robert Wolfanger Sr. and James Wolfanger.

Ralph was the founding Administrator of the Livingston County Nursing Home in Mt. Morris, when it was converted from the TB Hospital.  He was the Town of West Sparta Supervisor from 1966-1971, and a member of the Livingston County Republican Committee, a former member of the West Sparta Volunteer Fire Department. He was an engineer at the former Foster Wheeler Energy Corp. Ralph and Corinne were active as volunteers in their community, working bake sales, dinners, and baking pies. They were active with the Livingston County 4-H assisting with the county fair, transporting horses and other duties that needed to be done. They were chaperones to many children to the New York State Fair through 4-H. For several years Ralph and Corinne owned and operated The Country Corner Store in West Sparta from where they provided Turkey Dinners for people at Thanksgiving and Christmas. They also delivered presents and goodies to local families in need.  Ralph and Corinne also opened their home to many foster children over the years. A gentleman farmer with a quick wit Ralph and Cork lived on the farm on Kysorville-Byersville Rd. in West Sparta.

He is survived by his children Marjorie (Larry) Cansdale of West Sparta, Timothy (Nancy) Wolfanger of Dansville, and Pamela (Randy) Cox of TX, twelve grandchildren, twenty-four great-grandchildren, and several nieces and nephews.

Services will be held at a date and time to be announced by Hindle Funeral Home, Inc. 271 Main St., Dansville followed by interment in Oak Lawn Cemetery, West Sparta. Online remembrances may be left at HindleFuneralHome.com.

A Memorial Tree was planted for Ralph
We are deeply sorry for your loss ~ the staff at Hindle Funeral Home
Join in honoring their life - plant a memorial tree
Services for Ralph Wolfanger
There are no events scheduled. You can still show your support by sending flowers directly to the family, or planting a memorial tree in memory of Ralph Wolfanger.
Visit the Tribute Store

Share Your Memory of
Ralph
Upload Your Memory View All Memories
Be the first to upload a memory!
Share A Memory
Send Flowers
Plant a Tree