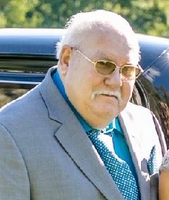 South Dansville - Dwight G. Burger Sr., age 78, passed away unexpectedly Sunday evening in the ER at Noyes Memorial Hospital in Dansville after being stricken at home. He was born in the Town of Dansville on August 19, 1941, a son of the late Dana and Ruth (Kiefer) Burger. He was also predeceased by a son Dwight Jr., and siblings June (Ernie) Neu, Duane and Larry Burger. On August 19, 1961, he was married to the Carrie Wyant Burger. Dwight, also known as Dad, Pa, or Poppy, enjoyed serving his country in the US Navy from 1959 to 1962. He was an active member of the South Dansville Fire Department for many years. He loved spending time with his family, hunting, farming, reading books and being a handy man. After he and Carrie raised their three children, they moved back to the house that Dwight was born in. The Burger Tree Farm. This is where he spent a lot of his time after retiring from Foster Wheeler, grooming the Christmas trees. He enjoyed seeing the bliss in the family's eyes when they came to pick out their Christmas tree. When he wasn't trimming Christmas Trees, he helped his wife, Carrie with C&G Country store, being the handy man and helping wherever was needed. Along with taking care of the beef cattle and ostrich's they had on the farm. He spent many years attending his granddaughter, Jessica's horse shows (which he never missed a show) and his grandson Ryan's baseball games. He enjoyed traveling to NC to see his daughter Karen and granddaughter Danielle, where they spent a lot of time making memories playing games and cooking delicious foods. Dwight was blessed with being able to enjoy some time with his great grandkids, Kyle and Kollin, who always made him laugh by telling jokes and all sorts of stories about the pranks they played on their dad and grandpa. Surviving in addition to his dear wife Carrie, are his sister Caroline (Dean) McCarthy, brother Chet Burger, daughters, Kelly (Jeff) Harvey of Dansville, and Karen LaFevers of Hudson, North Carolina; three grandchildren, Ryan (Bethany Wise) Harvey, Jessica (Ryan) Backus and Danielle LaFevers, great-grandsons, Kyle and Kollin Harvey; and many nieces and nephews. A memorial service will be held at the convenience of the family at the South Dansville United Methodist Church. Interment will be in Rogersville Forest Lawn Cemetery, South Dansville. Ref. Hindle Funeral Home, Inc. 271 Main St. Dansville, NY 14437. Online memorials may be left at HindleFuneralHome.com In lieu of flowers please make memorials to the South Dansville Fire Department, Fremont Ambulance Company or the American Heart Association.