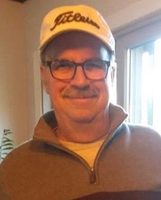 Dansville - Peter Howard Conklin, also affectionately known as "The Conk", "The Big Cat" and "Vern", age 63, passed away peacefully with his family on Friday, May 15, 2020. He was born in Dansville on March 27, 1957, which Peter referred to it as, "the year of our Lord". Peter's love of his family was immeasurable. He was a constant support in all aspects of their lives. Family was so important to him and always made them feel loved in so many ways. Peter was everyone's friend. He always knew your name and had a story to tell. He would greet you with his mile-wide smile with that special glimmer in his eyes. His sense of humor was spot on and he always had fun no matter what he was doing. He made things fun and made people laugh, always making people feel special. There wasn't anywhere he would go where he didn't find someone he knew and made new friends everywhere he went. Pete gave everyone a chance and believed in them. He was a very kind and generous man. He was free of judgement and knew what people needed. He was the first one to help and the last one to ask for it. When people asked for help, Peter either "knew a guy" or was able to go to his garage and pick out a tool or a part. At an early age, Peter began his love of music. As a child, he would go to Balcoms to buy the latest 45 or new release albums, which he always played for his brother and his friends. He loved every form of music: rock, blues, jazz, and funk. Peter especially enjoyed attending concerts, seeing all of his favorites live. He knew music so well that he could tell you the name of a song, the band and the album it was on. Peter, himself, played in a band, the Dansville High School Marching Band. He played the trombone and was famous for being in charge of the turn, which he could snap on a dime. Peter was a triathlete in high school, playing baseball, football and basketball. He continued to play softball for the village team, The Big Dick's Club. His greatest love was golf. He always said it was the greatest, most challenging game you would ever play. Peter loved the Buffalo Bills. He began going to games with his mother, father and brother. He continued to go to games and started tailgating. Before long, the CBnG tailgating truck came to fruition, named Illegal Motion. In time, that truck was the place to be for tailgating. Some of the most amazing food was grilled and shared, which continued to inspire what would be done to outdo the last. Peter worked as a carpenter for many years for Bennett Bros, he was then hired by fellow Dansville born Peter Krog in 1986 as Construction Superintendent of The Krog Group's Southern Tier Office. He was immediately thrust in charge of a large 4-story commercial building for Corning Inc. right on Market Street. Although he had never been involved in this new capacity, the project was a huge success, finished on time and budget, this set his mantra. Through his 30 plus year career, Peter was in charge of field operations for the Corning office and was Construction Superintendent for numerous large-scale construction projects in Durham NC, Nantucket MA, Coudersport PA, and throughout New York. He was extremely proud to finish his most recent project in his hometown constructing the CASA treatment facility. Although he was a master carpenter at his core his specialty was his people skills. Construction sites are a usual place to find dissention, finger pointing, and a non-friendly workplace. Peter would have none of that; his personality resonated to others, resulting in workers getting along, treating each other properly and usually forging long lasting friendships. He was often heard from afar in some large building yelling at the top of his lungs the phrase "LET'S GOOOOOO!" the pace of construction would then increase. Peter was full of enthusiasm, adventure and an optimism unparalleled as he saw the possibilities that life offered. At an early age he was full of laughter, fun and carrying that grin that grew into a smile that made you love him even more. Peter was that special, still holding on to his boyhood. Everyone will miss the many facets of Peter. Peter is survived by his wife, Terrie Applin, father, Donald Conklin, daughter Riley Conklin and son, Ryan Conklin. Surviving in addition are Peter's Sister-in-law Mary Conklin, nieces, Megan Conklin and Kaitlin Conklin. Peter was predeceased by Mother Nancy Conklin and brother Jack Conklin. Peter is survived by many friends. From poet Harry-Holland's "Death is Nothing at All", "How we shall laugh at the trouble of parting when we meet again!" A private memorial service will be held on Wednesday, May 20, 2020 at the Hindle Funeral Home followed by Committal prayer and Interment at Greenmount Cemetery. Due to the COVID-19 pandemic, there will be no public calling hours or funeral service. Peter's immediate family will have a private viewing. There will be a "Celebration of Life" at a later date. In lieu of flowers, please make memorials to the Ann and Carl Myers Cancer Center at NOYES Memorial Hospital, 111 Clara Barton St. Dansville, NY 14437. Online remembrances may be left at HindleFuneralHome.com