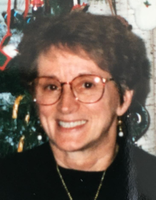 Dansville- Esther Rose Fay age 84, went to be with her Lord and Savior Jesus Christ at home early Saturday evening May 9, 2020, after a lengthy battle with ALS. Esther was born in the Town of Ossian on May 7, 1936, the daughter of Lewis Vincent and Clara Mae (Berry) Hinds and sibling to ten brothers and sisters. She was the middle child of a very close knit family, growing up in Dansville NY. Esther was very loving and adventurous by nature. She began waitressing at age 14 at the Bernarr McFadden Health Spa. At 17, she moved to Buffalo with her sister Greta where she later met and married her first husband, William Duffy Jr. of Glasgow, Scotland who had just enlisted in the USAF. During his basic training, Esther worked as a welder for Westinghouse in Binghamton NY. The newlyweds were first stationed in Cheyenne Wyoming and later, in Sacramento California. They eventually settled in the bay area to raise their 3 daughters. Esther enjoyed working as a telephone switchboard operator for Bell Telephone. The untimely deaths of her youngest brother Jack and her mother brought her and the girls back to Dansville NY in 1969. Esther began working at Gunlockes constructing furniture, and later took a position with Livingston County Cooperative Extension teaching life skills to local families, fulfilling her passion for helping people. She was always very involved in church. While attending the Dansville Assembly of God Church, she was instrumental in establishing the bus ministry which provided transportation for children to attend church and enjoyed her position as the bus leader for many years. Esther began working as a resident therapy aide at the former Craig Colony in Sonyea where she met her second husband Norman S. Fay Sr. who predeceased her on June 19, 2018. The couple were married on November 17, 1976, sharing 42 happy years together. Family was most important to Esther. She assumed the role of family reunion coordinator from older brother George to carry on the annual Hinds Family Reunion. She also became the family historian and photographer. Esther loved photography and she always carried a camera in her purse, ever ready to capture every important moment. She was extremely proud of her legacy of grandchildren and great grandchildren, but she also had numerous extended family who considered her their "mom". She "adopted" everyone she met, which included many missionary families they met and sponsored ministering throughout the world. Esther retired in 1996 at age 60. Very active all her life, she had a Silver Sneakers membership. Her "fit bit" was routinely tracking 10K steps daily until she began experiencing health issues in 2018. She moved to Dansville to be close to family and attended Dansville Free Methodist Church. Esther was diagnosed with ALS in July 2019. She is survived by her daughters, Bonnie Black of Groveland, Donna Welch of Geneseo, Isabella (Dan) Lowrey of Ossian, Normans children, Marilyn (Aaron) Blumer of WI, Michelle (Mark) Bleakley of LA, Dale (Cindy) Beeman IL, nineteen grandchildren, twenty one great-grandchildren and several nieces and nephews. Mom will be laid to rest next to Norman at Westview Cemetery in Ossian following a private ceremony with immediate family. Arrangements are by the Hindle Funeral Home, Inc., 271 Main St. Dansville. Online remembrances may be left at HindleFuneralHome.com. Memorials may be made to ALS, Free Methodist Church Addiction Recovery