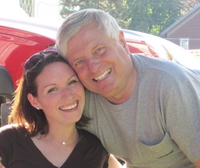 Dansville- Gary Paul Harrington age 71, passed away Saturday March 7, 2020, at Strong Memorial Hospital following a long illness. He was born in Dansville on February 28, 1949, a son of the late William and Cecilia (Thielges) Harrington. He was also predeceased by his first wife, Sarah “Sally” Ullyette Harrington, his sister, Patricia Genung. On October 15, 2002 he was married to Mary Harrington who survives. Gary worked as a systems protection manager for NYSEG for many years. His favorite activity was spending time with his grandchildren. He also had an interest in building computers, short wave radios, and tinkering. He enjoyed pheasant hunting and was a member of the Dansville Rod and Gun Club. He also was a member of the Union Hose company of the Dansville Fire Department. He spent a great deal of time researching his own health issues as well as the people surrounding him. In addition to his wife, Mary, Gary is survived by his daughter, Shannon Harrington (Bill) Mays, Mary’s Children, Molly (Terry) Vandelinder, Ben (Emily) Briggs, his sister, Rita Partridge, his brothers, Bill, Cliff, Ed Harrington, his grandchildren, Peyton, Carson, Oliver Mays, Marinda, Clara Vandelinder, Ruth Briggs, and several nieces and nephews. A Memorial Mass of Christian Burial will be Celebrated on Thursday March 12, 2020 at 11:00 am at St. Mary’s Church in Dansville. Online remembrances may be left at HindleFuneralHome.com In lieu of flowers please make memorials to the Vincent House 310 Second Ave. Wayland, NY 14572 or Holy Family Catholic Community 206 Fremont St. Wayland NY 14572.