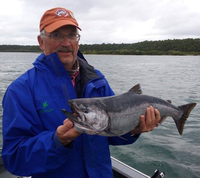 Sparta- Theodore James Scott "Ted" age 75, passed away unexpectedly early Saturday morning February 8, 2020, at his home in Sparta. He was born in Wellsville on August 15, 1944, a son of the late Raymond and Louise (Grantier) Scott. July 28, 1973, he was married to the former Kathleen "Kathy" Kimi Scott, who survives. Having taught in the Dansville School System for 34 years, Ted was an active member of the community. He was always willing to donate his time and expertise to those that asked, and sometimes even to those that didn't. As reflected by some of the community organizations he was involved in, Ted was a lifelong outdoorsman. He could often be found outside in search of the dream buck or fish. He traveled all around the United States and Canada in pursuit of that dream. Recent travels included Labrador, Alaska, and Saskatchewan. Although the dream often remained elusive, the pursuit continued. When not looking for the perfect animal to mount on the wall, Ted was usually helping his family with whatever hobby that was currently consuming their life. Whether acting as a groom at horse shows or the go-to problem solver at dog competitions, he approached every task wholeheartedly. Actual experience performing that task was irrelevant to his willingness to perform it. Ted was a generous and kind man that gave much of himself to his family, friends, and community. He will be missed tremendously. Ted is survived by his wife Kathy, three sons, Joshua and his wife Leila Qian Yu Scott of Singapore, Timothy Scott of Boston and Ryan Scott of Sparta, a brother Gregory Scott of Whitesville. Friends may call Thursday from 4 to 7 pm at Hindle Funeral Home Inc. 271 Main St. Dansville, where a time of memorial will take place at the conclusion of calling hours. Online remembrances may be left at HindleFuneralHome.com In lieu of flowers please make memorials to Reel Recovery: https://reelrecovery.org/.