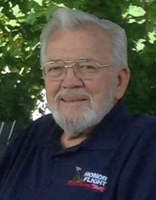 Dansville-Frank L. Mathieu age 87, passed away early Sunday afternoon November 10, 2019 at Noyes Memorial Hospital in Dansville. He was born in Ellwood City, PA on November 30, 1931, a son of the late Jacob and Katherine (Schaly) Mathieu. Frank Mathieu served his country in the US Army. He spent most of his military time at Fort Myers 3rd US Infantry Regiment in Arlington, Virginia where he was part of the Presidential Honor Guard under Harry S. Truman, which included guarding the president, dignitaries including General Douglas MacArthur, funerals at Arlington National Cemetery and the Tomb of the Unknown Soldier. He spent the remainder of his tour of duty in Korea during the Korean War. He met the love of his life, Nancy Reinheimer, while they both worked at Atena Standard Engineering Company in Ellwood City, PA. They eloped on May 11, 1957. They moved to Erie, PA so he could further his education at Penn State Behrend where he studied engineering. Frank and Nancy moved to Dansville, NY in 1961 when Frank got a job at Foster Wheeler Corporation where he retired after working 25 years. He then went to work at Morrison Knudsen in Hornell, NY and retired in 1995. Frank was an avid Buffalo Bills fan and loved going to the games. He loved to golf and played on a several golf leagues over the years. He enjoyed hunting and fishing in his earlier years. Frank and Nancy traveled often in their younger years and got to visit most of the United States including a tour of Alaska, Canada and Europe. He was a lifetime member of the Daniel Goho American Legion Post 87, a lifetime member of the Loyal Order of the Moose 1130, a charter member of the VFW Post 6780, a member of the Rod and Gun Club and the 25-year club at Foster Wheeler. In 2015, Frank was fortunate to be chosen to participate in an Honor Flight trip to visit Washington DC, Arlington VA, all the war memorials and the national cemetery while accompanied by his son. Frank and Nancy raised three children, Machelle (Ray) West, Michael Mathieu and Marcia Maggio. He was rewarded with four grandchildren, Hilary (Wesley) Hunt, Miranda (Carl Stephens) Mathieu, Jacob (Samantha Russell) Mathieu and Rachel West. He had five great grandchildren with the sixth due in February. He enjoyed his family time and loved family vacations. Friends may call Sunday from 1 to 4 pm at the Hindle Funeral Home, Inc. 271 Main St., Dansville. A Mass of Christian Burial will be celebrated on Monday at 11:00 am in St. Mary's Church in Dansville. Online remembrances may be left at HindleFuneralHome.com. In lieu of flowers please make memorials to the Honor Flight Rochester, PO Box 23581, Rochester NY 14692 or the Alzheimer's Association, 435 E Henrietta Rd, Rochester, NY 14620. He will forever be loved and missed.