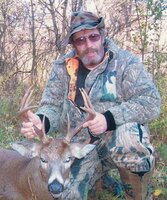 West Sparta- Donald Otto Wolfanger age 68, passed away early Monday evening August 22, 2022, at Strong Memorial Hospital in Rochester. He was born in Dansville on November 13,1953, a son of the late James and Jean (Le Bar) Wolfanger. On June 3, 1978, he was married to the former Deborah Black Wolfanger, who survives. Don retired Aug. 27, 2009, as corrections officer from Groveland Correctional Facility after twenty-five years of service. In his free time, he enjoyed hunting. He was a US Army veteran serving from 1975-1978. Surviving in addition to his wife Deb are a daughter Tammy Lynn (Brett) Meyer of Groveland, two sons, Douglas Wolfanger of TN and Jason Wolfanger of Mt. Morris, a sister Christine Clark and a brother Dave (Terry Polmanteer) Wolfanger both of Dansville. Eight grandchildren and several nieces and nephews. At Don's request there will be no public services. Arrangements are by the Hindle Funeral Home, Inc., 271 Main St. Dansville. Online memorials may be left at HindleFuneralHome.com. Memorials may be made to Humane Society of Livingston County, PO Box 233, Avon, NY 14414.